When it comes to planning which railways I’ll visit each year the two West Somerset galas have first claim on my diary (and if you want to know, yes the 2017 gala dates are already in my diary!).  This year’s Autumn Gala took place over four days from the 6th to the 9th of October. 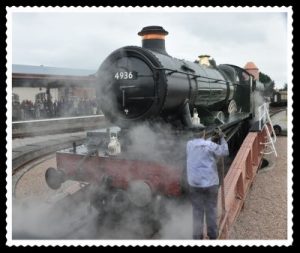 their other pannier was a bonus.  The other substitution from the originally planned line-up was 1450 in place of the LSWR M7 tank, I have nothing against the M7 but was pleased to have 1450 because the little 14xx class are one of my favourite locos and pairing it with an auto coach gave the opportunity to recreate the iconic GWR branch line train and the auto train features prominently in my video of the gala. 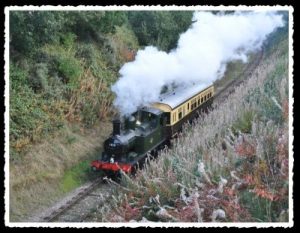 There was an extra attraction at this gala with 0-4-0 saddle tank Kilmersdon giving rides within the Minehead station limits in the beautifully restored Somerset and Dorset coach no.4.  The magnificent craftsmanship that has gone into the restoration of this coach is a credit to the hard work of the members of the S&D trust.

Some people may have been disappointed that the guest locos were all small tank engines and that there wasn’t any large main line locos, but I think that sometimes we railway enthusiasts and photographers are too taken up with the larger locos and tend to ignore the smaller classes which often have an appeal of their own. After all, the pannier “matchbox engines” where probably the most numerous class the GWR had in their fleet. 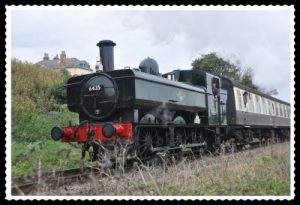 For the railway photographer the WSR has a number of publicly accessible locations that are only a few minutes walk away from the stations and offer vantage points that are almost as good as those available to line side pass holders.   For someone like me who enjoys riding behind the locos as much as photographing them the ability to get away from the station platform, but still being close enough to get the next train, gives the opportunity to get photographs without someone walking into shot at the crucial moment, this isn’t quite such a disaster when taking stills, but it can totally ruin a video sequence!

As always, the gala was very enjoyable and a credit to all the staff and volunteers who worked so hard to produce such an excellent weekend.

The WSR is currently unique among heritage railways in that it can turn locomotives at both ends of the line, Minehead has a turntable and there’s a triangle at Norton Fitzwarren, so all trains running with the loco the right way round has been a feature of the WSR galas for several years and is surely a major attraction for photographers.  However, for this gala Great Western Railway ran a DMU shuttle service from Taunton to Bishops Lydeard so visitors travelling by train to the gala could arrive by train rather than use the bus connection from Taunton to Bishops Lydeard.  The downside of this was that on the Saturday and Sunday when the shuttle was running the Norton triangle was unavailable so the locos weren’t able to  be turned at both ends.

While I think the shuttle was a good idea, I’m not sure it was worth sacrificing the WSR’s unique selling point of being able to turn locomotives at both ends of the line for.  I think there were a lot of photographers who were disappointed by the loss of this facility.

Here is my video of the gala.  I hope you enjoy watching it.

The video is 16:9 full HD so it’s best watched in full screen mode. Click on the ‘X’ to the left of the HD logo to watch full screen.