For me the Mid-Hants Pre-Spring Steam Gala marks the start of the steam railway gala season.

This year’s Gala was not without its problems. One of the originally intended guest locomotives was unable to take part because it was needed on its home railway, and a replacement was found in the form of GWR 0-6-0 pannier tank no.1501. For me this was a highly acceptable substitute as I regard any GWR locos taking part in a gala as a definite bonus. The other problem the Mid-Hants had was that both of the Black 5s that were to take part failed and it was a great credit to the hard work of the engineers at the railway’s works at Ropley and the locos owners that both locomotives were repaired in time to take part in the gala. 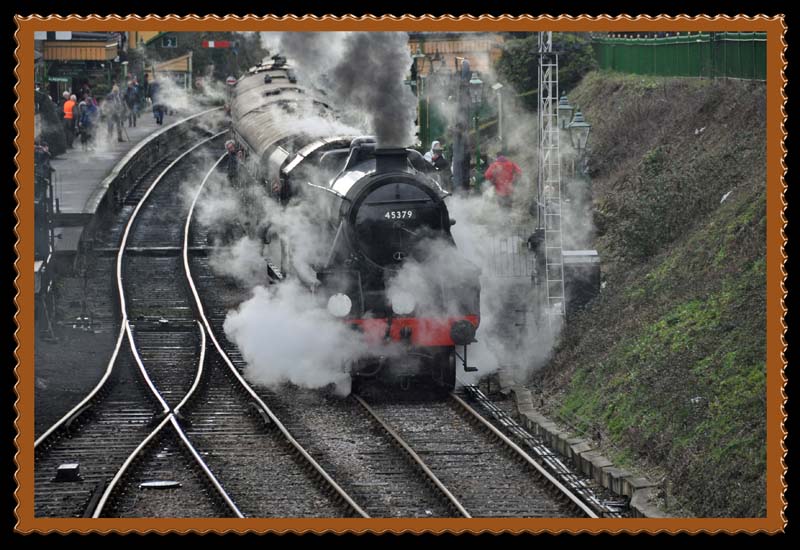 South Western Railway had its own problems on Friday and my train arrived at Alton 20 minutes late, fortunately I had allowed plenty of time for the journey so I still arrived with time to spare before the first train of the gala.

Sadly the weather was not all that kind. I went on the Friday and Saturday, Friday was very cold and there was even a brief flurry of snowflakes at one point thankfully the snowfall didn’t last very long and the snow didn’t settle on the ground. Saturday was a slightly better day temperature-wise but there was a light rain throughout the day which rather put a damper on things. The order of the day was take up your position, take your photos then either board the train or retreat to somewhere under cover to wipe the rain off your cameras. I found that the small plastic bag that had contained my lunch made a very handy protective cover for my video camera on the tripod, my DSLR took up its usual place under my coat. 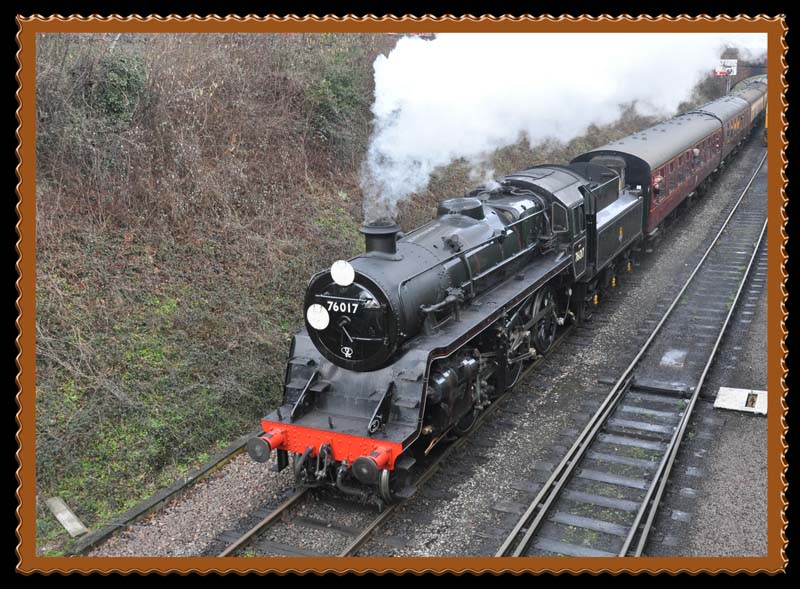 Weather aside I thought it was an excellent gala the theme of the gala was to celebrate the 50th anniversary of the end of steam on British Railways. The locomotives taking part were: 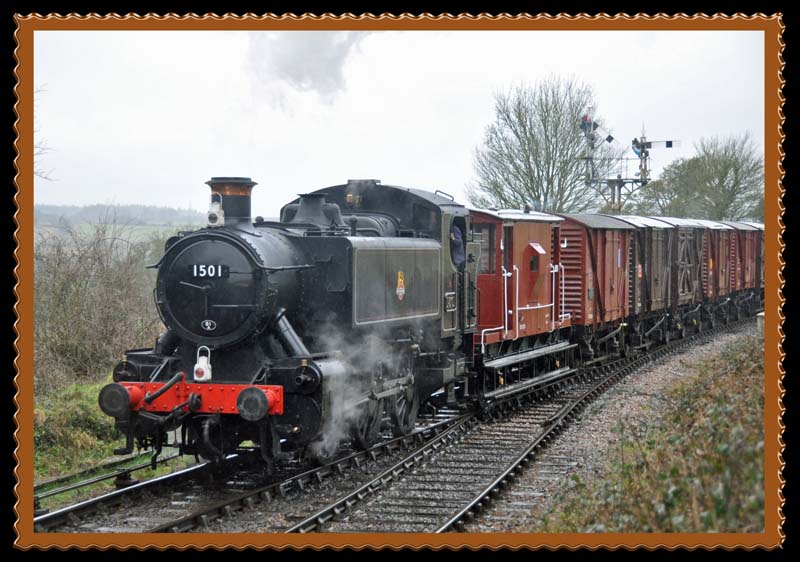 One of the interesting points of the gala were the regular freight train workings between Alresford and Ropley, there were two different freight trains running and between them they did four round trips during the day. As well as providing some variety for the photographers they were a perfect opportunity for the railway to show off its excellent collection of restored goods wagons.
The railway’s famous Real Ale Train, the RAT, was running as part of one of the passenger sets. 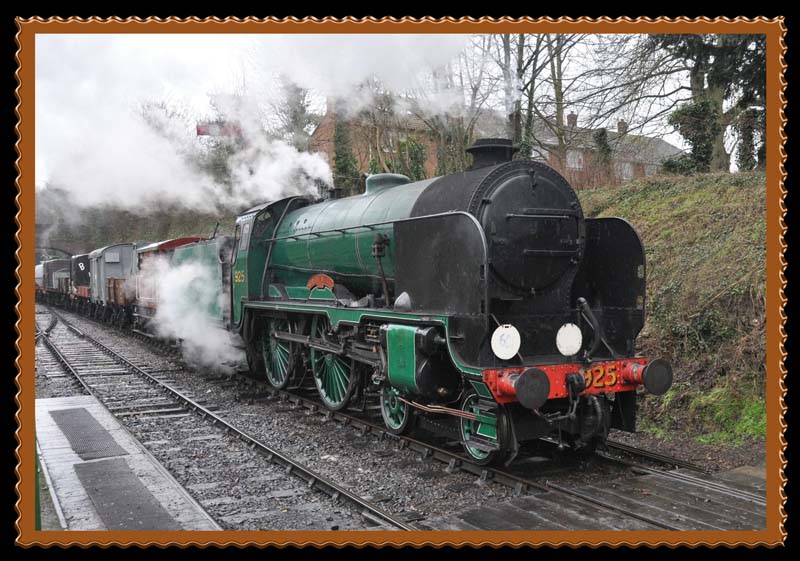 One of the ‘set pieces’ of the gala was the recreation of the 15 guinea special, the last steam train on British Rail complete with a replica of its 1T57 reporting number which was hauled by the two Black 5s, as was the original (although they weren’t the same Black 5s that worked the original train). I found it a bit disappointing that the railway choose to run this special as the first train out of Alresford which meant that those who travelled to the gala by train and started from Alton didn’t get to see it or have the opportunity to travel on it, the return working from Alton was the second to last departure meaning that there was no way of returning to Alton for anyone who travelled on it. I suspect I was not the only person who had hoped that it would run mid-morning & mid-afternoon so that I could have the opportunity to travel on it and video & photograph it passing through Ropley.
This disappointment, and the bad weather, aside I had an enjoyable time at the gala and was able to take some nice photographs and am looking forward to returning in October for the Autumn Gala. 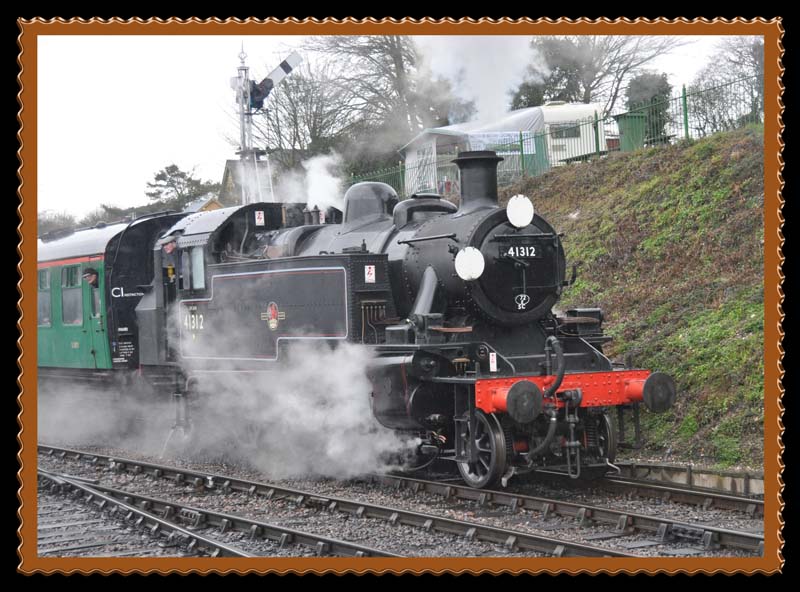 Here is my video of the gala.