At the current terminus of the Kent and East Sussex Railway is the town of Bodiam.  This small town has an impressive castle, built in 1385 by Sir Edward Dalyngrigge, a former knight of Edward III, with the permission of Richard II. The castle has no keep and all the rooms and chambers are built around the outer defensive wall.  This was characteristic of castle architecture in the 14th century.

Sadly, while the exterior of the castle has survived largely intact the interior has not, although enough of the walls and foundations survive to allow some reasonably educated guesses about the interior layout.

The castle has a round tower at each corner and a square tower in the centre of each wall, two of these towers contain the entrances.

The castle is surrounded by a huge moat that gives the impression that the castle is standing in the centre of a lake rather than surrounded by a moat.
Access to the main gatehouse was via two small islands in moat connected by bridges, one or possibly two of these were drawbridges.  The gatehouse itself had three portcullises.  The access to the postern gate was a much simpler affair. 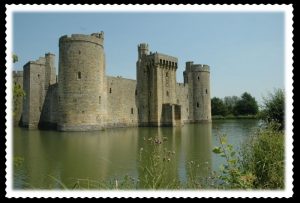 Viewed from the edge of the moat the castle has all the appearance of an impressive and powerful fortress but it is questionable if it was really intended to be a fortress.  The vast moat would serve to prevent an attacking force gaining access to the castle’s walls and to approach across the bridge to the main gatehouse would leave an invader exposed to arrow fire and if they were to bridge the gaps left by the drawbridges they’d then be confronted by the defences of the gatehouse itself with its three portcullises, the whole route a certain death trap for an invader.  Why would they even bother with this route when the postern gate offered a much less heavily defended point of entry. 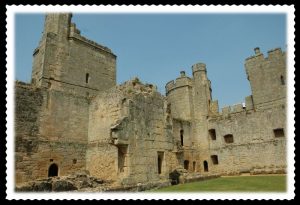 The castle walls also have some fairly large windows which are a serious weakness in the defensive capability of the castle and military experts say that due to weaknesses in the earthworks the moat could be drained fairly quickly and that it was more an ornamental feature than a defensive one.  The whole structure of the castle and its surroundings give the idea that it was designed to impress visitors with its strength and power and thus increase the status of its owners rather than being a purely military fortress. 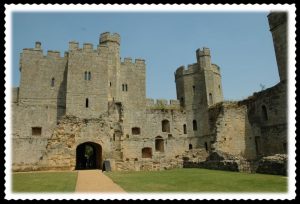 But whatever your opinion of its defensive capabilities, when viewed from the banks of its moat it presents the perfect image of what a mediaeval castle should look like.

Today the castle is owned by the National Trust and is a protected Grade I listed building and Scheduled Monument.
By far the best way to visit the castle is to travel by train on the Kent and East Sussex heritage railway and as the train approaches Bodiam you get a grand view of the castle in its setting which gives a good idea of the impression the castle would have made on visitors.  The station at Tenterden has a large, free, car park it also has an excellent museum that is well worth a visit.
The main purpose of my visit to the area was to travel on the railway, the castle was an excellent bonus.
You can find more pictures of my visit to the castle here.