This year’s Autumn Gala took place from the 21st to the 23rd of October and in keeping with previous galas was a very enjoyable event. 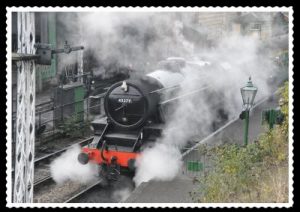 Sadly the 7F suffered a major failure and was unable to take part in the gala and much credit is due to the organisers for rapidly rearranging the loco allocations in the timetable at the last minute.  53809 remained on static display in the loco yard and was the subject of many photographs.

In addition to the passenger trains there were two goods trains in operation and on each day the double-headed Pines Express thundered non-stop from Alresford to Medstead and Four Marks giving a variety of trains for the photographic community to photograph. 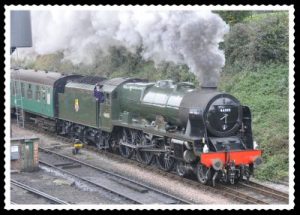 There was one minor set-back on Saturday when Royal Scot failed at Ropley on its first working, it was swiftly taken into the loco yard and the railway’s class 33 diesel took the train on to Alton, much to the surprise, and no doubt, dismay of those waitng further down the line.  However, the maintenance team were able to repair Royal Scot by the time the 33 came back with the train so Royal Scot was attached to the rear of the train and proceeded to Alresford and from then on worked all its booked turns.

The Mid-Hants galas are generally very busy events with a lot of loco movements taking place in addition to the arrival and departure of the passenger and goods trains, especially at Ropley and Alresford where on the Friday we were treated to the amazing loose shunt of the Queen Mary brake van through the station, an event I was able to capture and include in my video of the gala. 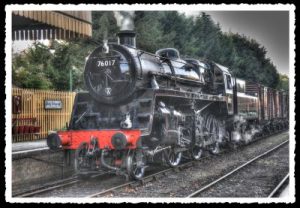 Due to its location there are not many off-station vantage points, but at Alresford and Ropley there are some good ones to be had.  When I’ve visited a railway’s gala for several years I’m always looking for potential new vantage points so my photos of each event don’t look too similar, I think I’ve identified a couple of new ones on the MHR which I intend to try out next year.

Those of you who have visited my website to look at my photos of the gala, and/or have watched my video, will notice the complete lack of photos of the 9F.  This is not because I have anything against 9Fs, I quite like them in fact, but I sometimes find at a gala that there is one loco that I somehow I am never in a position to photograph and this time that loco was the 9F.

Some of my photographs of the gala can be found on the Dragon Sanctuary here: Mid-Hants Gala

This is my video of the gala.  I hope you enjoy watching it.

The video is 16:9 full HD so it’s best watched in full screen mode. Click on the ‘X’ to the left of the HD logo to watch full screen.